I really enjoyed Netflix’s Emily In Paris and I am looking forward to the next season, if there is one. It’s that sort of show that I wouldn’t be too emotionally involved in because it’s just a light-hearted, entertaining show. However, as I was watching the show, it made me a little frustrated because moving abroad really isn’t that easy! And my post is just a few things that Emily and I have in common and the differences of us moving to a new city.

I moved to NYC three years ago and trust me, in reality, it didn’t go as smoothly for me as it did for Emily, first I needed to look for international movers in new york to help me with this. But I took this show with a pinch of salt and enjoy the beautiful location they shot in. And I really suggest you do too 🙂

So it’s a story about Emily moving to Paris for work, lives above a freaking hot French man and her move just goes so smoothly. I believe most of the Netflix subscribers have already watched it and boy, so many negative reviews of the show. At the same time, most people are just enjoying this simple, entertaining rom-com. Nevertheless, check out the trailer if you want to. Even if you want to watch it for the thousandth time.

What Emily And I Have In Common After Moving Abroad

I cannot speak for everyone else who moved to a different country but I definitely can relate to some things she’s been through the moment she landed on Paris soil.

I’ve been speaking English my whole life so moving to the America, an English speaking country and continent, I thought I’d fit in well.

How wrong was I!

I definitely didn’t expect to meet the challenge of cultural differences. NYC is so diverse, being Asian in this city that is half the population of my home country doesn’t make me stand out. Nor does it make it easy for me to fit in.

It is definitely eye-opening living in NYC for the past four years and I’ll probably write another post about it. However, this city is definitely way more competitive, loud, vibrant than where I came from. It’s nothing bad, it’s just different.

2. The whole ground floor and first-floor concept in Malaysia/UK and America

Malaysia, like in the UK, uses the ground floor as literally the floor that is on the ground. Then the floor above is the first floor and you move on upwards. After moving to NYC, it took me some time to get used to hitting the number 1 when I’m in the elevator. I have experienced spending about 10 seconds looking for the letter ‘G’.

In the show, Emily was climbing up the stairs to her flat (used in the UK) or apartment (used in America). After walking up four flights, she was devastated to find out that she’s got to climb up one more floor. Because of the whole ground floor/first-floor concept. Yup Emily, get used to it!

Ever since I started my career in Malaysia, I give my all to my job. Working overtime in Malaysia is not uncommon but it’s also because I loved my job. After moving to NYC, I stayed loyal to my work and my direct boss and was always working. On holidays, on weekends and even when my friend was visiting me from London, I had my laptop out and apologized to him because I needed to work.

You live to work. We work to live.

Luc, from Emily in Paris

After hearing this from the show, it hit me hard. I’m still reflecting and figuring out what I want – whether to live to work or work to live. 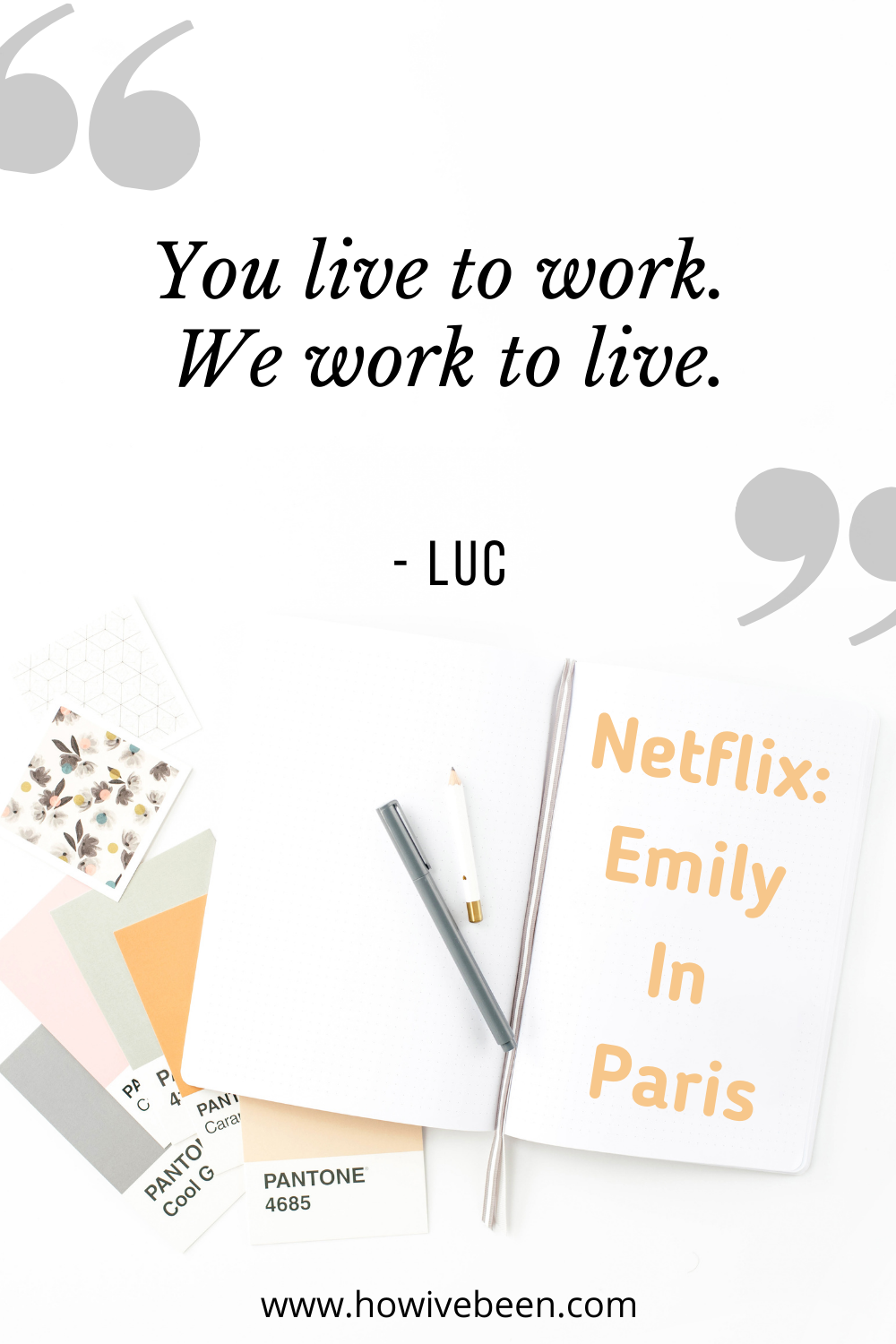 Sure, both Emily and I moved abroad. However, we definitely have different reasons for doing so and more importantly, how is it like living in another country.

1. Her job brought her to Paris and it came with a #roomwithaview

As we all know, her job brought her to Paris. For me, I came to America and started from scratch. I worked as a barista part-time whilst looking for a full-time job. She even had a place to stay the moment the landed on France’s soil #roomwithaview

You don’t want to know how my room looked like when I first moved here. Though I want to say that I didn’t actually have a kitchen, I was looking forward to having a nice home-cooked meal every day.

I came to NYC for a different reason, a personal one. The opportunity came at the right time, two years after I graduated with about a year of working experience. I’m in my twenties and full of energy and motivation to be a city that’s always hustling and bustling.

2. How does she make friends so easily?

She met Mindy (love her, by the way) when she was eating outside at a park. Then she met Camille when she was buying flowers. Really? She met two people in such a short time.

I’ve been in NYC for four years. I do hang out at parks when I first came and didn’t make friends with anyone. I don’t buy flowers though, so I guess I lost my chance of possibly meeting a friend (with a hot boyfriend but I won’t hook up with him though).

Making friends in a completely new country isn’t easy. I don’t live in Manhattan either so I’m not going to bars (which is apparently easy to meet friends). I’ve tried Meetup groups or something similar and got along well with some people but we’re not best friends now.

It has gotten countless negative reviews on Google and Youtube (and maybe even on other channels). I really don’t think it’s that bad. Maybe the Paris-related prints and keychain are a little extra because I don’t wear a top that shouts “New York City” all over it around the city. Or to work, that’s the last place I’d wear it to.

I salute Emily for wearing heels all over Paris, on the cobblestone streets – completely unrealistic. I tried doing that in NYC a few times and I don’t know how many times I curse myself for doing that.

What Do I Think About The Show?

It is completely unrealistic. Her smooth transition moving to another country (she doesn’t even speak the language!) and always saving the day whenever there are challenges. I don’t think life is that easy, honey.

There are quite some negative reviews regarding her wardrobe. We’re in the middle of a pandemic and I’m just really thankful Netflix produced a fun, relaxing, entertaining show for me to just binge watch and not think about more stressful things. We need a break from time to time, don’t get me wrong.

I hope I’m not the only one who enjoyed Emily In Paris!

And if you’ve moved abroad, how was the experience like for you?