F.R.I.E.N.D.S: The One With The Christmas Episodes

It feels like Thanksgiving (and Black Friday shopping) was just yesterday and it’s already Christmas? This iconic show started in 1994, wow I was about a year old, that’s ages ago. Anyway, I’ve been watching this show since 2015 and  9 Christmas episodes (there isn’t one for Season 10) just doesn’t feel like it’s enough. Here is a list of FRIENDS: The One With The Christmas Episodes to refresh your memory if you haven’t watched Friends in a while or if you haven’t watched it at all, go on HBO Max right now!

FRIENDS: The One With The Christmas Episodes Though it’s a Christmas episode, the gang is already making plans for NYE – which they make a pact to not bring a date to a party.

Monica decides that she wants to bring Fun Bobby but his grandfather died 2 hours before the party and his sobs totally brought the party down. Literally.

Dating a sweet and Italian guy named Paolo who is away and misses his flight back to NYC. Unfortunately for Rachel, she got attacked by a woman at the airport and shows up at the party all injured and sadly, without Paolo.

Seeing Janice again, whom Chandler brings along and her laugh.. Well… At the end of the night, Chandler breaks up with Janice and ended up dateless.

The best date is always a hot chick for Joey but what he didn’t expect is that she shows up to the party with her KIDS. I don’t know what else to say.

Phoebe met a nerdy scientist, David who gave up his chance of going to Minsk for a research grant. At the party, she told David that he should go to Minsk and.. it just ended there.

And there’s always Marcel the monkey there for Ross. 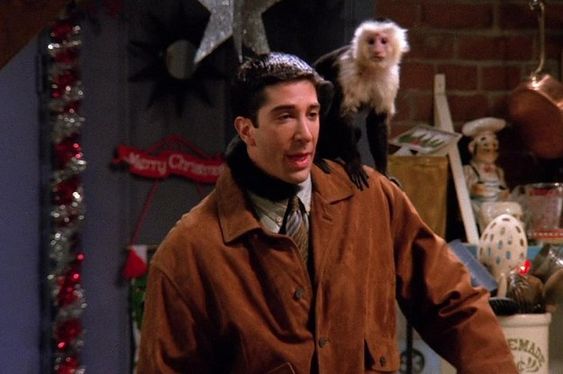 You can always have a great time with your closest friends without a date. Even when Joey kissed Chandler who was whining about not having a kiss at midnight and it was caught on camera. Not sure whether that’s the best NYE for him.

Season 2 Ep 9: The One with Phoebe’s Dad

Phoebe has never met her dad but her mom gave her a photo frame with a picture of her dad in it. This is where we start learning more about her past. Chandler and Joey tagged along the road trip with Phoebe to meet her dad and of course, it’s a hilarious ride.

“I’ve already lost a fake dad this week and I don’t think I’m ready to lose a real one.” – Phoebe

I’ve never been one who makes a list of the positives and negatives on why to date someone. But honestly, I don’t want to contradict myself, I’m sure you do that without realizing too. For example, how do you decide whether to marry someone – whether he’s got life goals? Is he financially stable? Does he have a good relationship with his family? Now that’s a list. As much as I don’t want to judge someone like that, I must say, I do it. And that’s what’s going on between Rachel and Ross in this episode.

Chandler and Joey’s gifts to the rest is the best scene for me:

Wiper blades and car smell for Rachel; Phoebe got toilet seat covers (and she was excited about it); Mr. Sweet Tooth Ross gets a cola drink and a lemon-lime drink and finally, ribbed condoms for Monica haha. 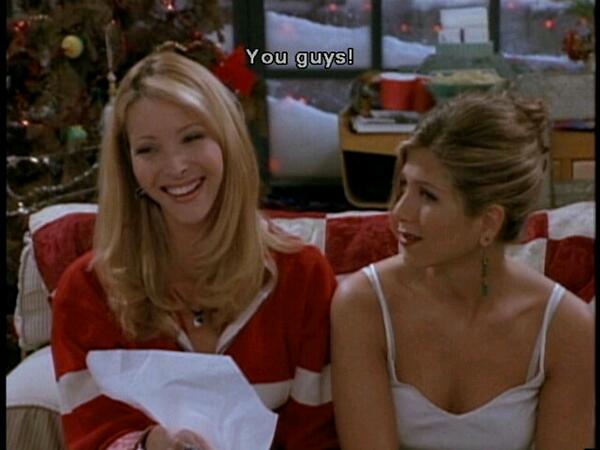 Season 3 Ep 10: The One Where Rachel Quits

The worse decision you can make (or more like a rash decision) is taking bad advice from your friends although they do it unintentionally. And that’s what Rachel did. She takes on Joey and Chandler’s bad advice to quit her job at the cafe. Having a job that you hate is one of the worse things ever, feeling demotivated, and not putting in 100% effort will just make you more miserable by the day. Rachel is suffering because her dream has always been to work in the fashion industry hence, the decision. 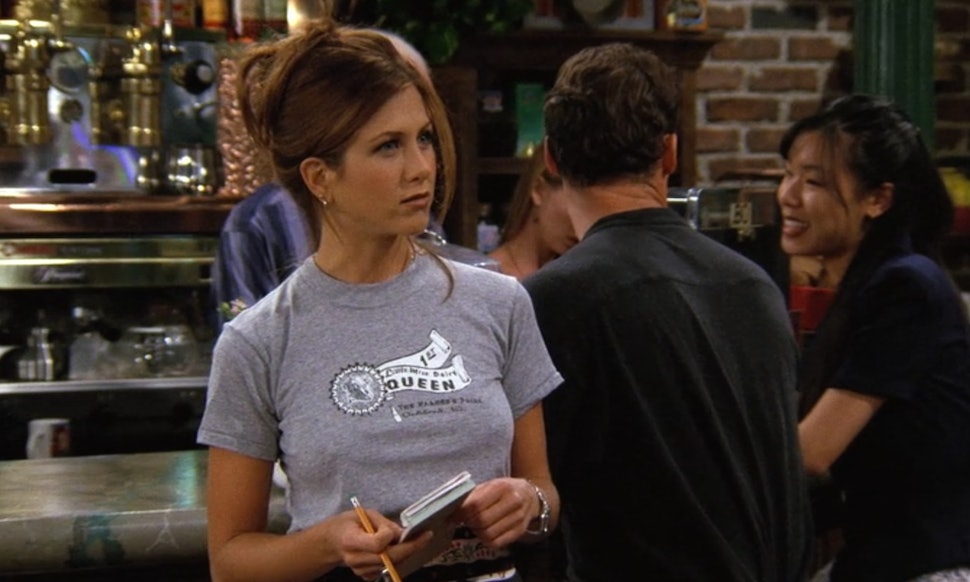 “Does this mean we have to start paying for coffee? – Chandler

Ross breaks a girl’s leg by accident and out of guilt, he becomes a girl scout and helps her sell cookies whereas Monica works with Chandler and Joey to put together Christmas trees for Phoebe as her surprise gift.

Great news: Rachel finally gets a new job! Thinking she wouldn’t have to make coffee again after leaving the cafe, on her first day she was taught to make coffee for Mr. Kaplan. Well, everyone starts from the bottom, girl which means you start from being the coffee girl and move your way up.

Season 4 Ep 10: The One With The Girl from Poughkeepsie

If you’re in New York City, dating anyone from another borough is far. I find it far traveling from Queens to Brooklyn, can’t imagine Poughkeepsie. And Ross is now contemplating whether to continue dating a girl he met on the train who’s from Poughkeepsie.

Rachel didn’t want to spend Christmas alone, she just wants to find a fling so Chandler stepped out to set her up with one of her coworkers. Lucky her name’s Hot Rachel, it isn’t hard to find guys who’d line up to date her. However, he didn’t mention to the guy that Rachel went out with that she’s just looking for a fling.. That’s going to get messy.

I’ve always loved Phoebe because of her quirkiness, in this episode, she’s writing a song for Christmas. As much as I love her, sometimes her songs suck so bad.

Joey’s always the great friend who volunteers to work for Monica in order for her to fire him to show everyone in the kitchen who the boss really is! And that’s because nobody likes her, she keeps being rejected and it’s just such an unhealthy workplace for anyone. I personally can relate, except I was never the boss so I couldn’t find anyone to fire. Things didn’t go exactly as planned, he’s so likable and the money is good, he just didn’t want to get fired.

Season 5 Ep 10: The One With The Inappropriate Sister

What happens when you’ve got an attractive guy living below you and he doesn’t seem to be interested in you? So Monica gets them a date Friday night. However, Danny has a very different, or intimate relationship with his sister. Which is kind of disturbing when you watch this episode.

Phoebe is helping to collect donations for the poor and she scores a spot in front of Macy’s. It wouldn’t be a Phoebe scene if nothing went wrong. You’ve got a man taking money out of her bucket for change for the bus, people throwing trash in it, an ashtray, a urinal. Ew.

It saddens me to see some friction between the boys. Ross is on sabbatical and is encouraging Joey to write his own screenplay. Seeing Ross and Chandler not getting on the good side of each other, Joey writes the best screenplay for them and have them read it out to each other. He also thanks them for being such supportive friends, that’s really sweet.

“I spent the rest of the day coming up with new, ultimate “Fireball”.” – Joey

“Wow Monica’s letting other people decorate her tree? Did someone get her drunk again?” – Ross

Of course, the side where Rachel, Chandler, and Phoebe decorated didn’t look the best and Monica turns her side over which obviously looks really pretty. Not surprising. I totally love this scene!

Joey’s hot roommate Janine gets to be one of the party people who dances on “Dick Clark’s Rockin New Year’s Eve” and brings along Ross and Monica who are the biggest fans of the show – the most hilarious part of this episode.

I don’t know how to elaborate further about how much of a good time Ross and Monica had, it’s just something you have to watch on your own. But trust me, it’s definitely not boring and you’ll be laughing through the whole thing, watch it here!

Rachel and Phoebe took the opportunity to ransack Monica’s apartment, searching for their Christmas presents. Monica apparently knew this was coming and she definitely did a good job hiding them from her friends.

“Dear losers, do you really think I’d hide presents under the couch? PS. Chandler, I knew they’d break you.”  Monica

In this episode, Ross who is part Jewish wants to teach Ben all about Hannukah but he had to dress up as the Holiday Armadillo who is Santa’s friend as the rental shop didn’t have any Santa costumes left. It’s two days before Christmas, do you think there would be any left?

“What are you doing here, you weird.. turtle man?” – Chandler

After a fire in Phoebe’s home drove Rachel and her to temporarily move out, her apartment is finally ready for them to move back in. HOWEVER, Rachel’s having too much fun living with Joey and Phoebe’s afraid she wouldn’t want to move back in with her. And she’s been showering Joey with gifts ever since.

Season 8 Ep 11: The One With The Creepy Holiday Card

Mona, whom Ross is dating suggested sending out holiday cards of the two of them, and that totally freaked Ross out. And after he confronted Mona about it and she asking him where are they going in the relationship, he’d rather they send out the holiday cards instead of answering the question. Hm. Really, Ross?

“Congratulations, you just got married.” – Joey

While dealing with her pregnancy, all Rachel wants to do is “rip off his sweatpants and fanny pack”.

“I think if it were a little colder in here, I can see your nipples through that sweater.” – Rachel

Now, that is really awkward.

Chandler and Monica, on the other hand, is dreading to go for dinner with Chandler’s boss and finding all sorts of reasons to get out of it. On the brink of getting caught lying, Chandler told his boss that he and Monica have separated and he was then dragged to a strip club. I can’t imagine that poor guy forced to spend time with someone you really dislike and it’s the worst thing ever if it’s your boss.

“I got to see how my life would be like without you. Please promise me that you will never leave me, that we will grow old together and be with each other for the rest of our lives.” – Chandler

Season 9 Ep 10: The One With Christmas in Tulsa

Seems like Monica and Chandler are the focus of this episode, I’m not complaining, it’s actually pretty sweet.

Having to move to Tusla for work, Chandler ends up having to work on both Christmas Eve AND NYE, leaving Monica to spend time with her friends in NYC. Telling everyone to go home and spend time with their families, he and Wendy are the only ones left and he shares with her how his previous Christmas celebrations were like. It’s a throwback episode and it’s just beautiful!

There’re also scenes on how his relationship with Monica progressed from being friends to the initial stage of their relationship and now, as a married couple. Although they’re not my favorite characters, I love seeing them together as a couple.

So here are all nine of FRIENDS: The One With The Christmas Episodes. It’s so hard for me to choose my favorite one because I love them all, I love the show, I love the characters! But tell me which is your favorite!